Join us for a lifetime experience of the spiritually powerful Mount Kailash region with Guru Shailesh and the Divine Heart Center team.

Registration is now open. Space is limited. Please register as soon as possible. Full payments are due by the end of June. Refunds are solely at the discretion of Divine Heart Center.

Interested participants who are not a member of Divine Heart Center can join the yatra and have to deposit a non-refundable earnest deposit of $1600 by end of February to confirm their spot in the yatra.

Indian nationals can also pay in INR (using an INR 71 exchange rate) to our organization in India.

Please email us at services@divineheartcenter.com for bank details.

Summary of the Benefits 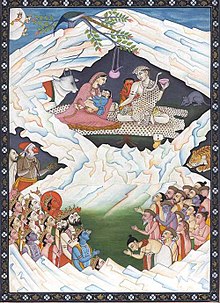 According to Hinduism, Lord Shiva, the destroyer of ignorance and illusion, resides at the summit of a legendary mountain named Kailash, where he sits in a state of perpetual meditation along with his wife Pārvatī. Like many of the Hindu gods, Shiva is a character of apparent contradictions. He is at once the Lord of Yoga and therefore the ultimate renunciate ascetic, yet he is also the divine master of Tantra. According to Charles Allen, one description in the Vishnu Purana of the mountain states that its four faces are made of crystal, ruby, gold, and lapis lazuli.It is a pillar of the world and is located at the heart of six mountain ranges symbolizing a lotus.

In Jainism, Kailash is also known as Meru Parvat or Sumeru. Ashtapada, the mountain next to Mt. Kailash, is the site where the first Jain Tirthankara, Rishabhadeva, attained Nirvana/moksa (liberation). 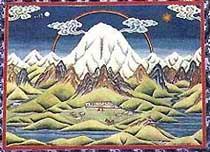 Tantric Buddhists believe that Mount Kailash is the home of the Buddha Demchok (also known as Demchog or Chakrasamvara),who represents supreme bliss. There are numerous sites in the region associated with Guru Rinpoche (Padmasambhava), whose tantric practices in holy sites around Tibet are credited with finally establishing Buddhism as the main religion of the country in the 7th–8th century CE.[It is said that Milarepa (c. 1052-c. 1135 CE), champion of Tantric Buddhism, arrived in Tibet to challenge Naro Bön-chung, champion of the Bön religion of Tibet. The two magicians engaged in a terrifying sorcerers' battle, but neither was able to gain a decisive advantage. Finally, it was agreed that whoever could reach the summit of Kailash most rapidly would be the victor. While Naro Bön-chung sat on a magic drum and soared up the slope, Milarepa's followers were dumbfounded to see him sitting still and meditating. Yet when Naro Bön-chung was nearly at the top, Milarepa suddenly moved into action and overtook him by riding on the rays of the sun, thus winning the contest. He did, however, fling a handful of snow on to the top of a nearby mountain, since known as Bönri, bequeathing it to the Bönpo and thereby ensuring continued Bönpo connections with the region.

The Bön, a religion which predates Buddhism in Tibet, maintain that the entire mystical region and the nine-story Swastika Mountain are the seat of all spiritual power.

The Mt. Kailash tour is an exceptionally meritorious and ambitious spiritual tour. While we have researched and selected the most comfortable facilities, once you enter Tibet, the facilities become scarce. In Tibet, shared rooms are the only option and bathrooms may be eastern or camp-like style. Also, note the altitude of each location that has been mentioned in the detailed program. Consult your doctor to ensure that you are fit to be in those altitudes. We may be required to submit a fitness note from our doctors about 45 days ahead of the tour when we get the final permission from the Chinese government.

It is said that one reaches Mt. Kailash only when Lord Shiva directly invites them!